Everyone wants their workout to be uplifting. Aerial yoga takes that concept literally.

The Difference Between Aerial Yoga and Regular Yoga

Aerial yoga, which is also called antigravity yoga and flying yoga, takes place in a silk or nylon hammock suspended from the ceiling. The hammock’s length is adjustable so that despite your height you’re only a few feet off the ground.

How Does Aerial Yoga Work?

The hammock supports your body weight. Meanwhile, you progress through a series of poses in much the same manner that you would in typical yoga. However, the fact that you’re not standing on the floor changes the intensity of the workout.

Is Aerial Yoga a Safe Form of Exercise?

It’s not a risky daredevil activity at all. The emphasis is on fitness rather than adrenaline.

Your hammock is never at a dangerous height. The idea behind the hammock is to support you, not frighten you.

However, you should be cautious when undertaking any new exercise routine. Be careful if you suffer from ailments that could be aggravated by an aerial fitness program where you might spend time upside down. Such conditions include cardiovascular issues and blood pressure problems.

The Benefits of Performing Aerial Yoga

1. Aerial Yoga Can Increase Your Strength 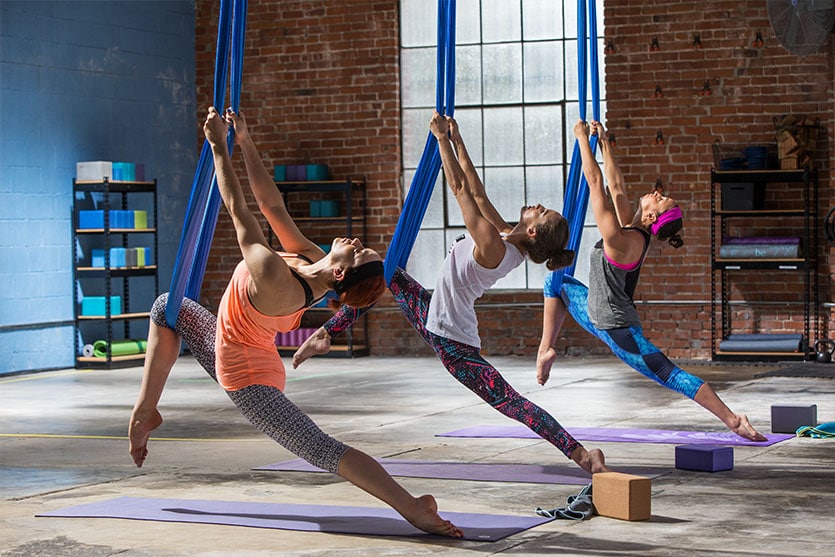 Exercising while suspended in a silk hammock doesn’t sound like traditional weight training, but aerial yoga taxes the muscles the way any resistance training does. The result is firm, strong muscles.

In its basic form, aerial yoga is already a mid-level intensity program. You can enhance your session by moving through your postures quickly to add a degree of high intensity to your workout.

You use your core to help remain balanced. That becomes a more significant challenge when your feet don’t touch the floor. Your core gets a steady workout during aerial yoga as it continually has to compensate for your movements.

5. Aerial Yoga Encourages the Development of Your Concentration

Being suspended while exercising forces you to stay focused. If traditional yoga teaches you to be in the moment, aerial yoga shows you how to stay in the moment.

It should be no surprise that aerial yoga can leave you with a better sense of yourself and your world. After all, that’s one of the factors that attract people to traditional yoga. So, when you combine yoga with a sense of floating, there’s an even better chance that you’ll leave the studio smiling.

If you’re having fun with any exercise workout, you increase the odds that you’ll remain committed to your fitness program.

7. Aerial Yoga is Friendly and Welcoming to Beginners

Aerial yoga may at first appear strange and complicated but it lends itself quite readily to someone new to both yoga and fitness training in general.

The equipment is simple to understand. There are no blinking lights to monitor or buttons to push.

It doesn’t seem logical that being suspended from the floor would make anything easier, but it does. For example, you will no doubt feel safer doing a headstand while supported by your hammock than you would feel if you were performing the same pose on the floor.

Don’t let an old sports injury slow you down. Aerial yoga is a no-impact fitness program.

The suspension gives you a break from the constant pressure that typically exerted on you when you exercise on a hard surface. With aerial yoga, the hammock takes the punishment, not your body.

How to Prepare for Your First Aerial Yoga Class 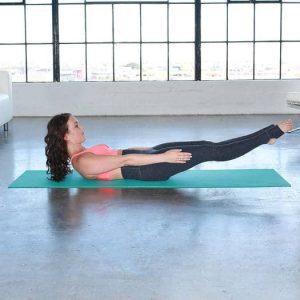 You’re encouraged to bring your water bottle. Instructors say that the class will make you thirsty.

Wear clothes that conform to your body. You want to be able to perform all your poses without your clothing becoming entangled in your hammock. A comfy oversized pair of sweatpants and a baggy tee shirt may be comfortable for an evening of lounging on the couch watching Netflix, but they won’t work for aerial yoga.

For a similar reason, you don’t want to wear loose jewelry that could snag the fabric of the hammock. In fact, some instructors require you to remove all jewelry.

Most people choose to go barefoot.

Are You Ready to Get Your Aerial Yoga Program Off the Ground?

If you’ve been searching for an exciting way to bring some fun to your fitness routine, aerial yoga may be just what you want.

The practice has grown so widely in popularity that you’re sure to find a class near you.

You’ll likely discover that your biggest problem isn’t getting to the class but having to leave it.

Previous Post: « Joining a Health Club Increases Your Odds of Actually Getting off the Couch
Next Post: HIIT is the Art of Getting Fit in a Fraction of the Usual Time »